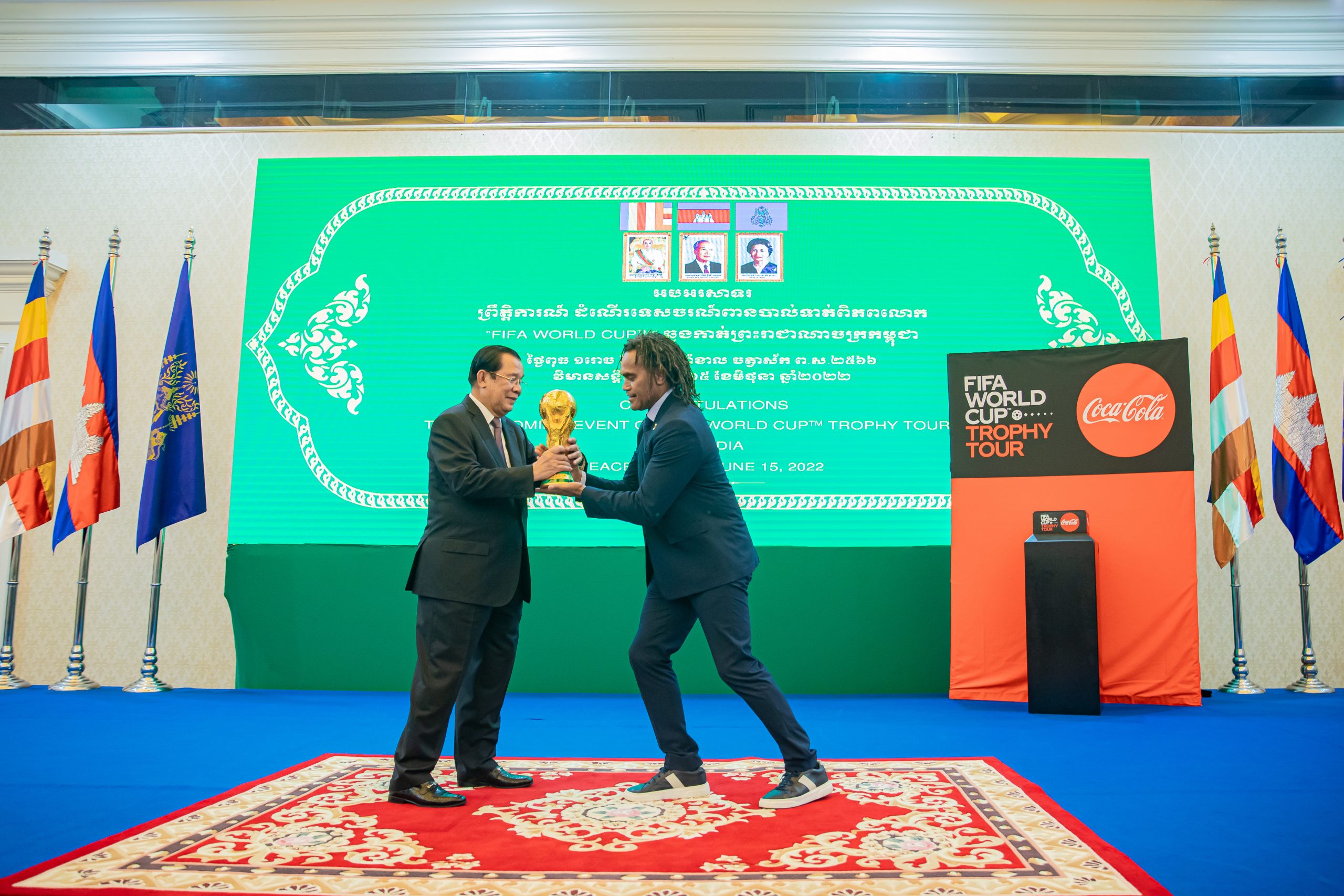 “The FIFA World Cup Trophy is one of the greatest symbols in sport,” said Romy Gai, FIFA’s Chief Business Officer. “Bringing it on tour gives us a unique opportunity to shine a spotlight on the fantastic communities around the world who love the beautiful game. The trophy tour – which will end back in Qatar, our amazing hosts – highlights our commitment to making football truly global as we realize the dreams of our fans and bring the joy and excitement of the FIFA World Cup to their doorsteps, together with our long-standing partner Coca-Cola.”

The FIFA World CupTM Trophy Tour by Coca-Cola kicked off in May 2022 in Dubai and will visit 51 football nations, and for the first time ever, the tour will visit all 32 FIFA World CupTM qualifying countries, inspiring fans across the world through exclusive consumer experiences.

This is the first time that the Kingdom of Cambodia is hosting the FIFA World Cup™ Trophy Tour by Coca-Cola. With the excitement building up, fans are expected to enjoy a world-class experiential event, showcasing the commitment of COCA-COLA and FIFA to creating positive social impacts through fan-centric initiatives.

The Original FIFA World Cup™ Trophy will arrive on June 15 where an unveiling ceremony will be held at the Morodok Techo National Stadium. The FIFA World Cup™ has inspired and shared the magic of believing through generations. Around 2,000 lucky fans will have the rare chance to catch a glimpse of the Original World Cup™ Trophy made of solid gold with its design of two human figures holding the globe aloft dated back to 1974. These fans can capture and savor this once-in-a-lifetime magical moment via an official photograph to be captured in the photography room. Fans need to get tickets to be part of the 2,000 lucky consumers. Coca-Cola Cambodia has shared the full mechanics on how to get the tickets via their official fanpage.

Aside from the rare chance given to these 2,000 lucky consumers, Coca-Cola will celebrate real magic moments that come from togetherness by giving even more Cambodian fans various engaging activities that they can enjoy. People can enjoy local snacks paired with their favorite ice-cold Coca-Cola drink in this free immersive experience, which includes interactive gaming booths where consumers can get a chance to win valuable prizes, the Coca-Cola Hall of Fame, and a live concert featuring some of the country’s top DJs, and live bands. Gates to the free event will open to the general public on June 15 from 3:00 P.M. until 10:00 P.M. at the Morodok Techo National Stadium.

David Wigglesworth, Chief Executive Office of Coca-Cola Cambodia Beverages Ltd. shared, “The FIFA World Cup™ Trophy Tour by Coca-Cola is an opportunity to unite people through a common belief and passion in football. We have encountered that spirit and that enthusiasm here in Cambodia as well – from the fans who have been super excited and even more from the Royal government who has been very gracious and accommodating as we prepare for the arrival of the Original FIFA World Cup™ Trophy. We are grateful for the full support of HE. Dr. Thong Khon, President of the National Olympic Committee of Cambodia (NOCC) and Minister of Tourism.”

The 2022 FIFA World Cup™ Trophy Tour by Coca-Cola has a mission to support the development of sustainability efforts at each location the tour visits . For the first time, consumer activations will be digitally led by Coca-Cola, reducing waste at each stop on the tour, our activation materials are locally produced and reusable, and minimizing the consumption of water, energy, materials, and other resources.