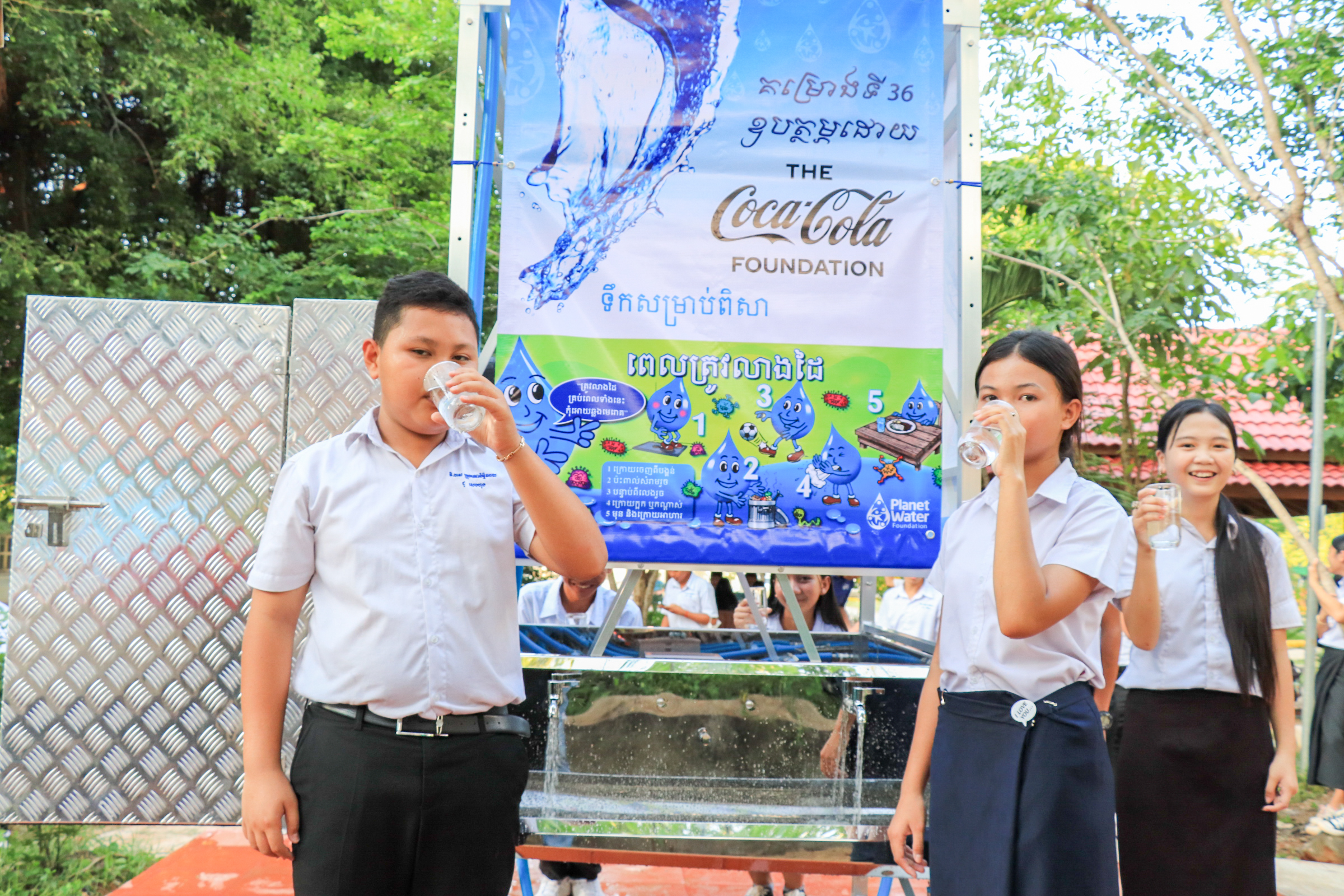 May 12th 2022 – A collaboration with the Planet Water Foundation will deploy the 37th AquaTower​ & AquaSan at Preah Vihea province, providing students and communities with clean water filtration systems, water latrine system and hygiene education, thanks to The Coca-Cola Foundation’s support.

The Coca-Cola Foundation – the global philanthropic arm of The Coca-Cola Company – has awarded a grant to Planet Water Foundation to deploy these AquaTowers & Aquasans in Cambodia.

“The Coca-Cola Foundation has a long history across the world of supporting projects that help protect and provide access to water resources. In Cambodia, we’re proud that our support of Planet Water Foundation will help provide free access to clean safe drinking water for communities through a project that will reach every province across Cambodia by the end of 2022”, said Ms. Saadia Madsbjerg President of The Coca-Cola Foundation.

Planet Water Foundation’s AquaTower technology removes bacteria, protozoa, viruses, pathogens and other contaminants greater than 0.01 micron, and provides children and surrounding community members crystal-clean drinking water.  Since 2016, through support from The Coca-Cola Foundation, Planet Water Foundation has constructed 36 AquaTowers and benefited over 60,000 people in 20 provinces across Cambodia. By the end of 2022, there will be 41 AquaTowers across every province of the country, providing communities with clean water filtration systems and hygiene education.

In addition to clean drinking water, the AquaTower projects also provide rural schools and communities with handwashing and sanitation infrastructure. Handwashing stations are integrated into the base of each AquaTower, and serve as key hygiene resources to recipient schools, with each station offering liquid soap dispensers as well as promotional banner messaging discussing handwashing awareness and best practices featured on each AquaTower.

The projects also support learning through activity-based hygiene education programs. These school and community-based programs are designed to educate and empower children and their caregivers to create a change in knowledge and behavior of water health and hygiene.

Her Excellency Seur Socheata ​, Under Secretary of State of Ministry of Education Youth & Sports said during the inauguration ceremony: “The Coca-Cola Foundation’s responsible gestures make it clear that the Foundation’s involvement in achieving the National Health Education Policy”

“I am beyond thankful for the support we have received and continue to receive from our sponsors and corporate partners, including The Coca-Cola Foundation,” said Mark Steele, Founder and CEO of Planet Water Foundation. “The impact we are making cannot merely be measured by numbers. By bringing clean drinking water to communities in need, we are drastically improving the health and quality of life for thousands of individuals who can now turn their attention to other aspects of life instead of having this challenge continue to be an ongoing concern.”

Since 2010, The Coca-Cola Foundation has contributed more than $13 million to water collaborations in countries across Southeast Asia.

COCA-COLA CAMBODIA COMES TOGETHER WITH MINISTRY, NGO TO PROMOTE RECYCLING